Having been through the U.S. immigration process himself, Mohammad understands the challenges faced by individuals and businesses in navigating the legal and business environment in the US. He has a passion for helping his clients succeed in entering and thriving in the USA.

Mohammad founded his own law firm, The Syed Law Firm PLLC in 2011 having worked previously at King & Ballow and Ashcraft & Gerel LLP. Before that, he worked for the Civil Litigation Branch of the District of Columbia Office of Attorney General, as well as at Rizvi, Isa, Afridi and Angell, a leading corporate law firm in Karachi, Pakistan.

Throughout these positions Mohammad gained considerable experience in multiple industries and legal specializations including the representation of businesses, entrepreneurs and investors in a wide range of civil and commercial matters.

Make an appointment / Write a testimonial 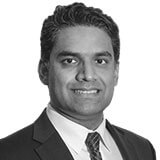